When Jim Gagnet wants to get things done, things get done. Those of you who don’t know Jim- know some of his work: he was one of the partners in Midtown Development that made a real difference in the Oregon District about 15 years ago. He brought what is now Pearl, but opened as the Diner on St. Clair to town- and was responsible for turning the old American Saloon into Coco’s 520 Bistro- and the current Coco’s Bistro [1] as well (with his life partner Karen Wick).

As the owner of Pacesetter Painting- he’s also made it a mission to eliminate graffiti on Wayne Avenue of late.

Now, he owns the former Blommel sign on Wayne Avenue at Hickory- just South of US 35- and he’s painting a mural of South Park on our Northern gateway. Big murals are nothing new to Jim- you’ve seen his work on The Neon and the Oregon Railroad overpass. 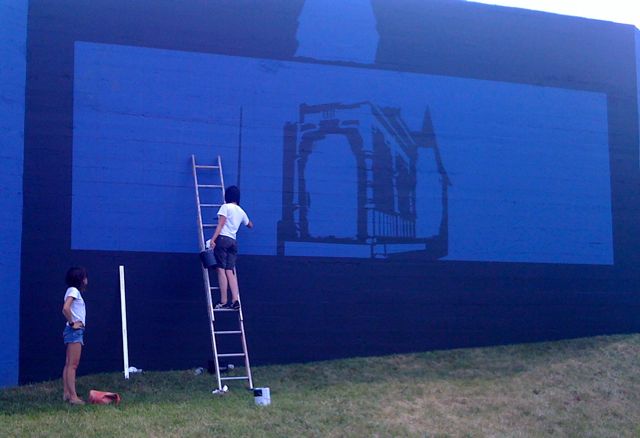 If you enjoyed this post, make sure you subscribe to my RSS feed [3]! If you wish to support this blog and independent journalism in Dayton, consider donating [4]. All of the effort that goes into writing posts and creating videos comes directly out of my pocket, so any amount helps!
Subscribe
8 Comments
Inline Feedbacks
View all comments

Thank goodness! Best of luck, Jim! Here’s hoping the idiot taggers (who are hell bent on marking all up and down Wayne) leave it alone.

This is fantastic! The Blommel sign building is a visible gateway to South Park, and it will be great to have a mural announcing your entry to the neighborhood.
Do you know what Jim’s plans are for the building? Having the outside looking good is a great first step; a solid business in the building again would make a great addition to the neighborhood.

@Scott-
ah, but I do know the grand plans for the building- but they aren’t ready for prime time yet.
The new windows will start going in on Wayne this month.
Should be quite the transformation.
(are you getting homesick?)

Hey – that’s Little Bradford – the first house that I bought and rehabbed for RehabaRama. It’s got the porch from 612 Warren Street that we were able to salvage before MVH demolished it. The woodwork & doors from inside will likely be used in the renovation of my grandmother’s house on Oak.

hey mista’ esrati – i’ve been wondering about this for at least a few days, and knew you’d be just the person to ask. i love it. just today i saw that they’ve incorporated color into the design – i kinda liked just the silhouette, but it’s beautiful all the same.

not sure if i should mention this, but i had heard the building was going to be a second coco’s?? guess you can’t comment on that…

More colors are coming-
and, no, it won’t be a second Coco’s- you heard wrong.