It was 2012. I ran for Congress. I made a video about the foreclosure crisis and called on the banks to admit responsibility for the properties they seize and let rot.

I didn’t go to the hardest hit parts of the city- I just went a few blocks from my house and office. 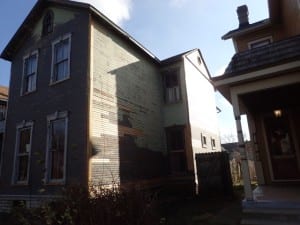 The house where I’m sitting on the porch, with the siding falling out on the side- has had occupants for about a year now. It’s still not painted, but, it’s back to habitable.

The guy who lives in it, is young, a contractor, he specializes in floor sanding and refinishing. He’s doing work around the neighborhood- and he, and his lovely girlfriend have been at a few neighborhood functions.

The house had sold at one time for well over $150K- and been totally rehabbed. He bought it for a fraction of that. 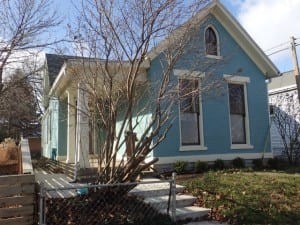 What was red, and unsightly is now an Air B&B and architects office

The house where the sink, furnace, and wiring is cut- is now an architect’s office and Air B&B. People pay $90 a night to stay there. The owner, lives next door. It’s a total rehab- and completely finished. Cute. Friendly. A neighborhood asset.

Why am I pointing these two out?

Because, the city of Dayton did nothing for this to happen. The neighborhood is what made it happen.

People are still investing in South Park, wanting to live here, wanting to fix things up, because of the community we have created. Our public schools suck just as bad as they do for Westwood, or Residence Park or Dayton View- which has way nicer housing stock.

We all have the same crappy street cleaning, same crappy trash collection, same overburdened police, same poor parks and rec department- but houses that would have been doomed for demolition come back from death’s doorstep here. True, the historic zoning makes it harder to tear things down, but, in South Park things are happening.

We have a church- that houses an arts center. We may have another one on the way- right next door. The neighbors produce free Shakespeare in the park, we have progressive parties in the summer, an active neighborhood association. One idiot organizes social soccer on Sundays. We have a book club, hot toddy parties, the list goes on.

There are still opportunities here- and interest. Someone is thinking about a wine bar, another about a conference center/reception hall.

And all of it happens, without the help of an “Economic Development director” or the “West Dayton Fund” or ED/GE grants, or tax abatements or any of the other government “tools” that you constantly hear about as the reason for a “renaissance.”

On Monday the City Commission will swear in another pawn in the game, and re-seat a seat warmer. The Mayor will talk about all the things that she has accomplished- and yet, things are still grossly wrong in Dayton.

Property values are still moribund. Population is stagnant. Schools are the worst in the state. Our expectations from government are low. Taxes and fees are increasing. Service is lackluster.

The city has cut funds to neighborhoods considerably. Our police force is at record low staffing. Problems we had 25 years ago are still being dealt with- or pushed to the back burner, while we’ve added the heroin epidemic on top of it all. White-collar jobs are still fleeing downtown for Austin Landing, the Greene, and if it wasn’t for Obamacare driving the growth of CareSource, Dayton would be broke.

The focus always seems to be on buildings. We were told if we fixed the Arcade and built new “class A” office space downtown jobs would return, then we were told if we built new schools, performance would improve, now we’re looking at the Arcade again, we’re buying buildings with no public use for a premium over market value, we’re making holes in the ground on Ludlow street- all in the name of “economic development.”

For 2016, my advice to Dayton: go back to Lincoln and the Gettysburg address. Invest in community, in the power of people. Look at communities and figure out if the density is there to have them come back- or look to consolidate to other neighborhoods. Find ways to improve the quality of life. Stress pride in our community. Talk about what we have that’s working- and celebrate those that make living in the city awesome. Find ways to empower people who homestead. Look at empty houses as opportunities. And most of all, stop accepting mediocrity.

We need to dig in and find our collective integrity, a new respect for our citizens, innovate our way around the hand we’ve been dealt, inspire all to expect more, and bootstrap our way into being a city that is once again known as the cleanest, safest city in America. Invest in people, not in the buildings- and the return will surprise you.

South Park isn’t perfect, but, we’ve managed to buck all trends. It happened because we decided that we wanted something better, and came together to make it happen.

If you enjoyed this post, make sure you subscribe to my RSS feed [3]! If you wish to support this blog and independent journalism in Dayton, consider donating [4]. All of the effort that goes into writing posts and creating videos comes directly out of my pocket, so any amount helps!
Subscribe
7 Comments
Inline Feedbacks
View all comments

Dave, nice points, and I agree a lot of the points in this post. I have two rental properties in South Park which involved more in rehab costs than I would like to admit (one of which I got in foreclosure and had been empty for two years). But at the end, I am still able to get a profit each month, and those efforts (along with some others) have helped clean up one of the streets in South Park. Long-term, these are good investments. But why South Park for me? Dave hit on a lot of the high points. But there are a few things missing that should be mentioned. UD and MVH deserves credit for doing things around the edge of South Park that serve as one other reason for people like myself to invest in the neighborhood. One of those has simply been helping to maintain and expand their economic presence and simply their size as opposed to shrinking or skirting away from the urban area. For sure, the South Park Tavern’s and Ghostlight’s and strong neighborhood association are great things (perhaps the main things) to sell people on renting at strong market prices in the neighborhood and taking the chance on investing there. But another selling point I’ve found for renting is the proximity to Brown St. and the number of people who are affiliated with UD and MVH (or other hospitals like Children’s) that are seeking to rent there.

South Park, in 5-10 years, will have little complete rehab opportunities at the current rate. Each year, if 5 or so properties get rehabbed, and as prior rehabs are resold to people who want to live there as opposed to just rent, then I think that neighborhood will essentially a finished product. The only concern to me is the lack of activity across Wayne St. in Twin Towers—even marginal improvement there would help stop the leakage of property crime that occurs in South Park.

I would like to know how much further along neighborhoods such as South Park would be by now if they could incorporate as their own discrete entity and thus not have to deal with Dayton City Hall.

By levying its own local tax that doesn’t get sent to Dayton City Hall, an independent South Park could contract with Kettering schools (or even a nearby private school – think Holy Angels?) to provide a better school district for the neighborhood.

A deal could be struck to provide a sheriff’s deputy for security if if Dayton police can’t or won’t do the job.

And by becoming independent from Dayton, the local money can actually get reinvested in the neighborhood – not scattered on dubious deals. Free of Dayton City Hall, the neighborhood would go a whole lot further.

Think about it – the Ohio Revised Code does have a section for this, called detachment – the opposite of annexation.

I neglected to point out that South Park has had an advantage thanks to the benevolence of Miami Valley Hospital which has paid for 2 community based police officers for the last 15 or so years. Community based policing- staffed properly- makes a difference.
Cheap investment for MVH which pays no property taxes- and has its own private police force too.

The private police force probably also helps make a difference for crime rates in the area around South Park, to include the Fairgrounds. For example, Grandview has a police force of around 50 officers with full arrest authority and some of whom are trained SWAT officers as well —crime rates in Five Oaks and Grafton have dropped by half in the last ten years. Some of that, though of course nobody is exactly sure how many, is due to Grandview Hospital PD (who has their own chief as well). Again, not disagreeing with points you made, but these are some of the indirect causes for continued improvement in that part of Dayton.

Yeah, I am sure South Park will become it’s own fucking entity – literally and figuratively some of the stupidest shit I’ve heard in a while – the police have a hard enough time stopping crime there – the rate is fucking insane. Keep dreaming, assholes.

Nice post there, F-You! Your command of the English language is amazing!! Do you kiss your mother with that mouth???

Yeah, we’re talking about Esrati here. Not some sweetheart. A guy who sucks the fun out of everything and is probably tracking my IP right now because he’s an asshole. That guy.

My command of the English language includes cuss words because they’re fucking awesome. Esrati should know about cussing.