This is the post I hate to write each year. 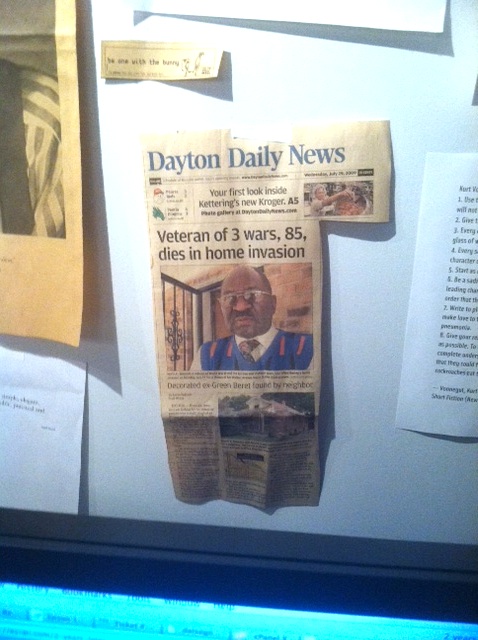 That clipping sits behind my monitor on the wall 365 days a year. Reminding me that the murder is unsolved.

That’s unacceptable. But, of course, a police department that still can’t tell us who killed one of their own, Officer Kevin Brame, can’t be expected to always get their man.

We often hear about the reduction of gun violence- but, it’s smoke and mirrors. According to a recent NY Times article, Dayton doesn’t do so well solving murders by guns in Dayton- despite our “shot spotter” technology.

New York City stands out with a murder clearance rate of 86 percent in 2019, a year when only 54 percent of the city’s murders involved a firearm. By contrast, the same year in Dayton, Ohio, the police cleared only 21 percent of their murders, 94 percent of which were done with a firearm.

Source: What Improves the Chances of Solving a Murder? – The New York Times [1]

I don’t know who the next chief of police will be, but, hopefully, we can hire someone who get our police department staffed properly, supported well, and actually find the people who killed Sgt Major North Woodall. RIP. 12 years ago.

Hopefully, before the end of 2021- we can solve this heinous crime.

Very sad for sure, what a brave American, this is what Dayton has become. It also shows you are nothing but a fake leader. You criticize but in reality you have done nothing to make anything better in Dayton. Why don’t you personally actually help clean up the crime in the city? Ahh putting up basketball nets wow oh so nice, is that your best? Have you done anything to help the victims of crime in Dayton? Why don’t you clean a neighborhood up and show us how its done? Oh that’s right you just run for office and run your mouth.

Listen up “Pat F” you fuckstick. Before you call me a “fake leader” sign your name. Also- do something. In case you haven’t noticed- South Park- a neighborhood I’ve worked on since 1986- just had a house sell for $375K. I bought my house, my office and my 2 cottages for less than than $56K. I’ve cleaned up more trash than you’ve ever seen. And- run a business that employs people, and fought and won court cases concerning the Ohio Sunshine laws and freedom of speech.
And- yes- I also hang basketball nets.
What have you done?

Just giving you a hard time David. I know you have worked hard, certainly way harder than most to help the city. You have exposed a lot of corruption and other issues. Is it really fixable is a good question? Yes Dayton PD for example is not the best but it has to be hard to get a decent person to want to be a cop in Dayton, look what they have to deal with crime wise! Who wants to work on a department where everything is dumbed down and standards lower to hire people by skin color. If I was going to be a cop I would work in an area where the streets are safe and the people support me and I do my job and make sure crime is never a serious problem.