Normally, it’s hanging in a prominent position, in wide view, and well lit.

It has a place of honor. It’s respected. And it’s where we turn when the National Anthem plays.

But, we’re UD, home of the Flyers and a town built on the back of Wright Patterson Air Force base, and we don’t need to do any of that.

We’ll have a color guard march out to center court- and display the flag that way, and that’s fine. But, on the rare occasion when there is no color guard- where is the flag? 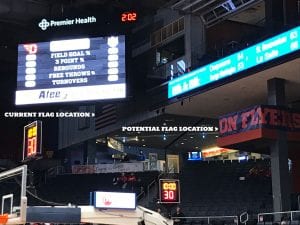 UD Arena hides our flag in the dark, instead of in plain sight. Photo and options by David Esrati

Well, if you peer behind each of the giant stats boards in the corners- there is a very large flag, one in each corner, hung on the wall, in the shadows.

You can hardly see them through the uber patriotic digital light show they play on the monitors- with stripes waving, as the National Anthem is belted out live from in front of the scorers table.

All this is well and fine. But, in the year of national turmoil where standing or kneeling was headline material, you’d think UD would make an effort to properly display the flag. Just one. Well lit, in a place of prominence.

I brought the issue up to rookie president Dr. Eric Spina- his response- As the Arena is finished in the next two years, the flag issue will be addressed directly and in a positive way. Until then, compromises are being made while still being respectful.”

I brought the issue up to the guy in charge of the renovation, Scott DeBolt, his response: “We will evaluate the placement of the american flag next summer when once we identify the locations of the new sports lighting.”

I’m sorry, but, as a veteran, as a UD Season Ticket holder, as a member of the Dayton community, as we invite people from across the nation to our arena for the first four, I don’t think these answers are satisfactory.

If you want to place a value on the importance of flying our flag- I suggest you ask these guys: 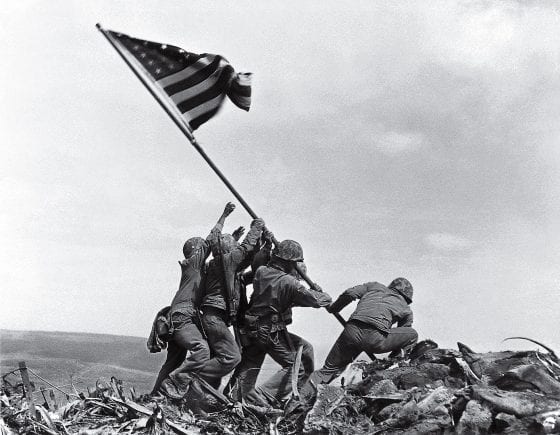 If you enjoyed this post, make sure you subscribe to my RSS feed [2]! If you wish to support this blog and independent journalism in Dayton, consider donating [3]. All of the effort that goes into writing posts and creating videos comes directly out of my pocket, so any amount helps!
Subscribe
0 Comments
Inline Feedbacks
View all comments