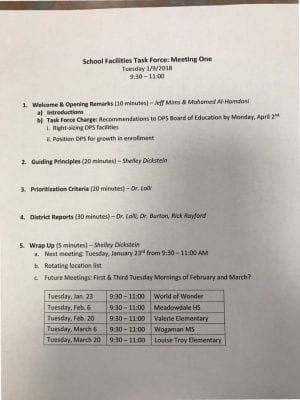 The “Agenda” that the interim Superintendent handed out.

The Board Secretary and I exchanged pleasantries. I spoke to the Superintendent. I took a photo of the agenda (which I shared on FB and with the Dayton Daily News). The Superintendent was the one to tell me the meeting started at 9:30.

Just before the meeting started, Dayton Daily news reporter Jeremy Kelley started asking questions of City Commissioner Jeff Mims and school board elect Mohamed Al-Hamdani about the legality of this meeting- citing ORC and the Open Meetings Laws [2] (commonly called the Sunshine laws). At some point, they told Kelley that it wasn’t a public meeting and he’d have to leave. My longtime friend Chuck Hamlin, cameraman for CH 7, packed up his gear, the CH7 beat reporter and Kelley all headed outside the room in the airlock- and then to the street. Kelley started calling his bosses telling them he was told to leave.

DPS PR person Marsha Bonhart came over and told me I had to leave. I suggested she call the police, because that’s the only way I’m going. She said she wouldn’t do that. Next thing you know, the Superintendent apologizes to everyone and adjourns the meeting that never started. People mill around. CH 7 comes back in and interviews some folks (of course not interviewing me).

It’s clear that Mohamed Al-Hamdani didn’t pay attention to the sunshine laws when he was in law school. It’s pretty obvious that Jeff Mims, despite years of public service on DPS school board, the State School Board and the Dayton City Commission- didn’t read the law either. Nor do they care about being honest and open about their plans for the school district. And, Al-Hamdani hasn’t even been sworn in yet.

Rev. Harris was also in attendance as was Dr. Walker, the Treasurer Hiwot Abraha, the associate superintendent Sheila Burton and a few other staff. All should be censured. The OSBA clearly lays out the rules.

The role and function of board members often are misinterpreted by the public. The board is a policymaking body and members are the chief advisors to the superintendent on community attitudes. Board members do not manage the day-to-day operations of a school district; they see to it that the system is managed well by professional administrators.

Source: Running for a school board | Ohio School Boards Association [3]

It continues- I’ve highlighted a few things that are pertinent to this discussion:

As a start, the following guidelines are offered. A good board member:
• Knows that he or she can legally act as a board member only when the board of education is in session. No one person, unless authorized, should speak on behalf of the board.
• Avoids administrative decisions or attempts to second-guess the administration. The superintendent is the chief administrator and the board has no administrative function.
• Is well acquainted with school policies.
• Should vote at all times in the best interests of the children of the school district.
• Is flexible and realizes there are times when changes must be made, when tradition cannot be honored and when pressure must be ignored.
• Remembers that board business often requires confidentiality, especially in processes involving students, personnel, land acquisition, negotiations and security.
• Is interested in obtaining facts, but also remembers that the administration has responsibility for operating the schools, rather than spending all its time making reports to an individual board member.
• Is a good listener at board meetings, on the street corner, in the community or anywhere else approached, but never commits himself or herself, the board or the administration.
• Knows that the reputation of the entire school district is reflected in his or her behavior and attitude.
• Is able to support a decision when it is made.

The reality is- this is an illegal body, trying to operate illegally, and board members and a prospective board member, seem oblivious to the law.

This was what I sent yesterday:

Ms. Gum,
I would like notification of all meetings of the “Task force” that was announced last Thursday.
For clarification- what time is the meeting tomorrow– and is there an agenda?
Could I please have those asap.
Also- can you please clarify when the authorization was voted on by the school board to direct the superintendent to engage the district in this task force?
And what the vote was?
Who chose the members of the task force? And when did the board assign Mohammed, Rev’s Walker and Harris to this task force?
Thanks

And here is the condescending uninformative answer I got from Ms. Bonhart, who didn’t bother to even tell me the correct time of the meeting:

The Open Meetings Act defines a “public body” as any of the following:
a. Any board, commission, committee, council, or similar decision-making body of a state agency, institution, or authority, and any legislative authority or board, commission, committee, council, agency, authority, or similar decision -making body of any county, township, municipal corporation, school  district, or other political subdivision or local public institution;
b. Any committee or subcommittee thereof;
2. Identifying public bodies
The term “public body” applies to many different decision -making bodies at the state and local level.
If a statute does not specifically identify an entity as a “public body,” Ohio courts have applied several factors in determining what constitutes a  “public body,” including:
a. The manner in which the entity was created;
b. The name or official title of the entity;
c. The membership composition of the entity;
d. Whether the entity engages in decision-making;
e. Who the entity advises or to whom it reports.
Close-up: applying the definition of “public body”
Using the above factors, the following entities have been found by some courts of appeals to be public bodies:
a. A selection committee established on a temporary basis by a state agency for the purpose of evaluating responses to a request for proposals and making a recommendation to a commission.
However, at least one court has determined that a selection committee whose members were appointed by the chair of a public body, not by  formal action of the body, is  nevertheless a public body and subject to the Open Meetings Act
B. “Meeting”
1.Definition
The Open Meetings Act requires members of a public body to take official action, conduct deliberations, and discuss the public business in an open meeting, unless the subject matter is specifically exempted by law.
The Act defines a “meeting” as: (1) a prearranged gathering of (2) a majority of the members of a public body (3) for the purpose of discussing public business.
c. Discussing public business
With narrow exemptions, the Open Meetings Act requires the members of a public body to discuss and deliberate on official business only in open meetings.
“Discussion” is the exchange of words, comments, or ideas by the members of a public body.
“Deliberation” means the act of weighing and examining reasons for and against a choice.
One court has described “deliberation” as a thorough discussion of all factors involved, a careful weighing of positive and negative factors, and a cautious consideration of the ramifications of the proposal, while gradually arriving at a decision.
Another court described the term as involving “a decisional analysis, i.e., an exchange of views on the facts in an attempt to reach a decision.”
Note that the Ohio Supreme Court recently held that discussions of public business may also be conducted over any other media, such as the telephone, video conference, email, text, or tweet.
In other words, just because a discussion did not occur in-person does not mean it is exempt from the requirements of the Open Meetings Act.
In evaluating whether particular gatherings of public officials constituted “meetings,” several courts of appeals have opined that the Open Meetings Act “is intended to apply to those situations where there has been actual formal action taken; to wit, formal
deliberations concerning the public business.”
Under this analysis, those courts have determined that gatherings strictly of an investigative and information-seeking nature that do not involve actual discussion or deliberation of public business are not “meetings” for purposes of the Open Meetings Act.
More importantly, the Ohio Supreme Court has not ruled on whether “investigative and informational” gatherings are or are not “meetings.” Consequently, public bodies should seek guidance from their legal counsel about how such gatherings are viewed by the court of appeals in their district, before convening this kind of private gathering as other than a regular or special meeting.

If you enjoyed this post, make sure you subscribe to my RSS feed [10]! If you wish to support this blog and independent journalism in Dayton, consider donating [11]. All of the effort that goes into writing posts and creating videos comes directly out of my pocket, so any amount helps!
Subscribe
5 Comments
Inline Feedbacks
View all comments

I can’t believe this crap! Can’t they get their sh%t together or just hide and lie better?

Keep up the good work, Dave! Make these clowns sweat!

[…] Source: Esrati and his video camera shut down first task force meeting before it starts – Esrati […]