“Mr Esrati, we’re going to ask you to leave” said Dr. Robert Walker, president of the Dayton Board of Education at their “Board Retreat” on Saturday, June 24, 2017.

At issue was the board taking what was presented as a critical time sensitive vote, on a report from the Treasurer, Hiwot Abraha, a mere 4 days after their regularly scheduled “business meeting” on Tuesday.

Did Abraha have no clue that this was critical on Tuesday, or was this purely an attempt to slide things through without the normal scrutiny and public comment allowed at the regular board business meeting? Me thinks the latter, which is why I spoke up, and invited my ejection.

From the agenda on Board Docs:

I recommend that the Board approve the following resolution for the Original Appropriation Measure for Fiscal Year 2017.

Section 5705.38 of the Ohio Revised Code requires the adoption and/or amendment of an Annual Appropriation Measure.

NOW, THEREFORE, BE IT RESOLVED by the Board of Education of the Dayton City School District the following sums be and hereby are set aside and appropriated as indicated in the 2017-18 Original Appropriations.

BE IT FURTHER RESOLVED, pursuant to Section 5705.412 of the Ohio Revised Code, the the Board President, Superintendent, and Treasurer certify that the Dayton City School District has in effect for the fiscal year 2018 the authorization to levy taxes, which, when combined with the estimated revenue from all other sources available to the district at the time of certification, are sufficient to provide the operating revenues necessary to enable the district to maintain all personnel and programs for all the days set forth in its adopted school calendar for the current fiscal year.”

Lee and Baguirov were absent, and Sheila Taylor abstained from this vote (using good judgement) as Walker, Lacey, Rountree and McManus voted just like this wasn’t anything different than normal Standard Operating Procedure. According to the records on Board Docs, Taylor also abstained from the Superintendents recommendations.

Note, in the Board Policy Manual [1], page 34, this retreat actually had instructions:

EVALUATION OF SCHOOL BOARD OPERATIONAL PROCEDURES
The Board plans and carries through an annual appraisal of its functioning as a board. Evaluation is held in the month of June, or during a regularly scheduled Board retreat, with no other items on the agenda with all Board members present. This appraisal considers the broad realm of relationships and activities inherent in Board responsibilities. 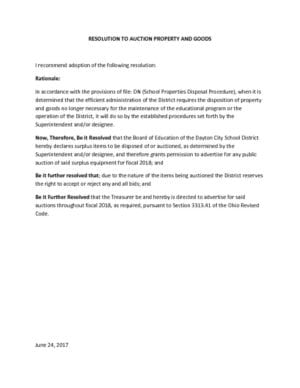 This wasn’t the only issue that they were going to vote on, nor was it the only thing the public should be informed of. An odd RESOLUTION TO AUCTION PROPERTY AND GOODS was included, without any specifics being given. This could be anything from extra desks to the real estate on Wyoming near MVH and UD, the site of the former Patterson Kennedy Elementary School, that this blog featured in my post and video “Dirty Deals Done Dirt Cheap”. [3] Of course, I wasn’t still at the meeting when this was discussed, but how can a board vote to approve something as unspecific as this? And, why on a Saturday morning retreat, instead of the business meeting?

There is no other school board that meets as often, as long, or does more to disrespect the public than this one. The sheer number of meetings and length, force people who want to be involved or serve as checks and balances to go to ridiculous measures to track and follow. The Open Meetings laws of Ohio, known as the Sunshine Laws, unfortunately don’t even have a provision to stop this kind of obfuscation of the public business, but maybe they should.

While I stated they are breaking the law, it barely matters, because the Sunshine laws have the least amount of teeth for punishing misbehaving public bodies that could possibly written into law. Think of them more like a 20 year old cat with one tooth- not a tiger. However, one parent was so incensed by Saturdays actions that she’s ready to file a pro se action on Monday and is looking for affected citizens to join her in the suit. She’s had legal help in formulating the argument. Please message [email protected] [4]if you want to participate.

Also note, seven more teacher resignations since Tuesday. How much longer is this board going to whistle Dixie while a contract isn’t put in place? Some observers have said that this boards actions, from the firing of former Superintendent Lori Ward, Treasurer Craig Jones, the hiring of the outsider, rookie, Rhonda Corr, to the strife of the RIF, to the payoff of David Lawrence, to the failure to negotiate, is all part of a plan to decimate the district and force State takeover- giving the Republicans in the State House their petri dish for replacing regulated public schools with charters city wide- much like what happened in New Orleans after Katrina. It’s a Betsy DeVos wet dream come true.

In other business, why is Ron Lee, with being absent so many times that he couldn’t vote on the Dunbar Coaching choice, still allowed on the board? The State Law [5], is 90 days, however, in a normal school board, this could mean 2 meetings in a row, however since Dayton meets almost 2x a week, maybe there should be a tougher standard. Of course, this part of the law is what would be used to send Dr. Adil Baguirov off the board for non-residency, something this board refuses to do.

The Darran Powell Question
From the board policy document pg 120:

Other than the new school year may technically start in July, by having this rushed meeting, and it not coming up, there can be no revote now on the hiring of Dunbar football coach Darran Powell, who was not hired last Tuesday. His petition for a revote [6] now has 1547 signatures and 399 comments.

Final word: At least a few board members are beginning to see the sheer insanity of this “organization” that can’t get its business done according to schedule. Watch for future developments. 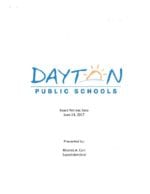 The kind of information that should be given at every meeting.

Also note, much of the “Superintendents presentation” – which has information of the type that should be given at EVERY meeting, shows some troublesome stats- like declining graduation rates, poor 3rd grade reading scores, and horrible enrollment stats for the coming year, despite the best efforts of The Ohlmann Group with their premium priced contract.

If you enjoyed this post, make sure you subscribe to my RSS feed [8]! If you wish to support this blog and independent journalism in Dayton, consider donating [9]. All of the effort that goes into writing posts and creating videos comes directly out of my pocket, so any amount helps!
Subscribe
2 Comments
Inline Feedbacks
View all comments

This so-called retreat sounds like a pretty obvious attempt by DPS/CF to avoid public scrutiny while they play with public property and public money. THESE GUYS ALL NEED TO RESIGN.

[…] I’d even gotten home from getting thrown out of the Saturday “Board Retreat” which wasn’t, there was a notice in my email about yet another “Special Meeting” […]