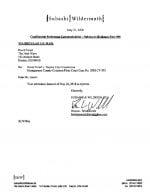 Brian Wildermuth either didn’t present my offer to the board, or he did illegally. Click to download PDF

On May 22nd, I offered to settle the lawsuit over the Sunshine Law violations [2] of the public body, “school closing task force” on this blog and in writing to the City and the School Board.

This requires the attorney’s to take the offer to the school board. I go to board meetings, I watch the agendas. There has been no discussion of legal issues mentioned in the executive session briefings since I made the offer.

On June 2nd, I got a letter of rejection from the school boards lawyer of my settlement offer.

This means that either they illegally discussed it in executive session, of which they’ve had two meetings this week, both, “Special Meetings” and both about personnel. The meeting on Friday was just over the change of contract for board attorney Jyllian Bradshaw. This was 4 days after another special meeting- called for the budget presentation and a bunch of HR Changes- without public input, including the travesty of paying Erin Dooley less than Wyetta Hayden for a similar position. [3] 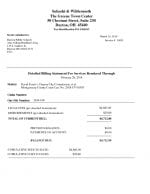 Invoices from Subashi & Wildermuth for “protecting” the school board from a violation of the Sunshine laws. Click to download PDF

In the meantime, the board has already spent $12,500+ defending themselves- and lost the first round.

It cost taxpayers $625+ to have the board come in for a special meeting to vote on this.

But, those two “special meetings” this week- cost the taxpayers too. The meeting about the budget seems to be an annual thing- why the treasurer can’t have the numbers at the regularly scheduled business meeting like every other school board in Ohio is a mystery- and why they had so many personnel issues that couldn’t wait- is one thing, but to call a board meeting just to change Jyllians Bradshaws title?
REALLY?

You see, each board member collects $125 per meeting, plus mileage. So having these five idiots come in for one vote on Friday cost you $625 plus mileage:

Why there isn’t outrage over this I don’t know. The rule of “P’s” should apply- Prior Planning Prevents Poor Performance.

And if you are wondering about the pay?

Here is the section of Ohio Revised Code on school board compensation:

The lawmakers had to make the change and add a cap, because of idiots like the former DPS board who were scheduling meetings almost weekly and stuffing their pockets. Normal school boards meet at most twice a month. DPS finds a way to meet almost weekly, often times hitting the cap in August- meaning all the meetings after that are unpaid.

And on June 12, they are going to meet again- to give Erin Dooley a supplemental contract to fix the last oversight- and to hire yet another expensive PhD $117,040  to oversee the office of exceptional children. Dr. Angela Nichols is coming from the Lebanon City Schools. Because, well, you can never have to many PhDs in education.

There are also some inconsistencies in the supplemental contracts- with Dr. Donetrus Hill getting a premium double supplemental for $5,200, maybe because his title is longer “Chief of Curriculum, Instruction, PD ?Math/Science”

Still no word as to who the principal will be at Belmont, although former DPS superstar principal David White just got moved in Trotwood from High School Principal to Junior high principal- and it wouldn’t surprise me if he made a return, with some kind of secondary responsibility as “head of discipline” to justify a boost in DPS pay to come closer to what he makes in Trotwood.

Both the men’s and women’s basketball coaching positions at Dunbar are still up in the air. The women’s team hasn’t been playing in summer ball, thanks to the indecision by new AD Shawna Welch. Coach Jim Cole was “coach of the year” last year- which in DPS doesn’t mean anything. He’s basically built this program from nothing to a winner in 3 years.

Of course, the question is, will the board try to vote in a review session, as has been the case forever. That’s why we have “business meetings” and there is time for public input- but, hey, that would be following the rules, and they just don’t like to do that.

And, for tomorrows meeting, the agenda does have them going into executive session to discuss legal matters… maybe they will get smart and settle, before they buy Wildermuth a new boat.

If you enjoyed this post, make sure you subscribe to my RSS feed [7]! If you wish to support this blog and independent journalism in Dayton, consider donating [8]. All of the effort that goes into writing posts and creating videos comes directly out of my pocket, so any amount helps!
Subscribe
3 Comments
Inline Feedbacks
View all comments

DPS is a colossal waste of tax dollars.

At least one board member asked questions about the costs of moving the admin offices. It’s a step.

Just curious – who did the redacting on the invoices? Is that the way they were sent to you? If they weren’t redacted, at least on future invoices you could see who they talked to in order to approve the offer rejection. My guess is that they probably just spoke to Lolli who said “no”. It probably wasn’t even discussed by the Board.

It’s a shame that the Board can’t at least appear to TRY to follow the rules about Executive Sessions, etc. The rules are a little complicated, but they’re not that bad.