Last night I went to a Dayton Public Schools Board of Education meeting. It began at 5 pm, it ended at 8pm. Most of it was in executive session.

Why did they meet? Was it because Dr. Adil Baguirov couldn’t stand the fact that John McManus was still President Pro Tem until they met again?

Or was it because they needed to discuss yet again the layoffs of the para professionals – the action they tabled at the Nov 17th meeting- and Dr. B stormed out of, because he’s so anxious to fire people.

It certainly couldn’t have been to watch Judy Spurlock the head of HR give a presentation that would have had her fired from any professional organization. She just had to provide the excuse- because there was nothing for the board to learn, to act on, to advise on, to direct, to….

The meeting was held outside the board room, around a big square table. No microphones, no video by the board (just me) and a bunch of highly paid people sitting around with nothing to add. This kind of meeting is why meetings get a bad rap. 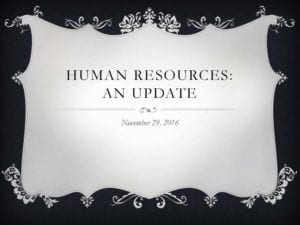 Not only were the slides a ramble, with no clear deadlines, actionable items, or decision trees- they were read to the group. To make matters worse, Ms. Spurlock sounded like she had one foot in the grave- thanks to some sort of illness. She didn’t even have control of her presentation- instead, having the board secretary advance her slides.

They were all uploaded to Board Docs just before the meeting- as JPGs- which aren’t ADA compliant (American’s with Disabilities Act) which also means they weren’t searchable.

Typically, corporate presentations include a title, a date, and the organization name on every slide- these didn’t. After I mentioned the omission of the PDF- it was uploaded [1].

What did we learn from Ms. Spurlock?

We learned that a half-a-billion dollar organization didn’t have standard operating procedures for standard HR tasks: posting jobs, interviewing, hiring or enrollment. There is no system, other than an outdated Lotus notes app to manage certifications, professional development, or evaluations. That the process for firing people- which seems to be very critical right now- doesn’t really have a process for exit interviews, collection of DPS property, or even what to do with their email accounts, passwords etc. In other words, we’re dealing with an organization being run by people with systems from the eighties- maybe.

Flowcharts would be really helpful in defining the workflows- but those weren’t presented. We learned they use CASNET- without defining what it was. It seems to be some kind of document scanning and archival process. No one asked how it fit in with other systems- if they even exist? It seems that this organization hasn’t heard of ERP- Enterprise Resource Planning, maybe that’s the norm when you turn an Elementary School principal into an HR Director.

I guess I’m qualified to teach physics, because I stepped foot in the Science building at WSU a few times too.

They’d looked at one piece of software- “Search Soft”- but had ruled it out because it wasn’t user friendly. Was a specification written? Do we know what they are looking for? I sit on the Technology Steering committee- do you think this has come up? Nah.

They will launch PD Express [2]in summer of 2017 to manage their Professional Development. Again- the presentation didn’t inform the board of costs, length of contract, where the content was coming from. I’m sitting here wondering why they aren’t using the same tools they use to teach their students for their professional development- Google Applications for Education- GAFE, why there is even a spot on the web talking about it [3]. Of course, because this is a meeting for board self worship- those of us in the peanut gallery who would ask this question- aren’t allowed. In business, we call this “eating our own dogfood.” In Dayton Public Schools, we call this buying what some other district bought, because no one we’ve hired actually knows anything about IT, Web Development, Cloud apps, ERP, Open Source Software etc. etc.

Then we talk about “Customer Service” where we want to redesign the HR page. Really? The district just spent over $90k building and rebuilding their proprietary site with a local firm. If it’s bad after that much money, why is the person in charge still employed… oh, right, she’s retiring in 30 days, and the RFP for marketing and communications support is still not awarded.
And the redesign needs to be  “Visitor Friendly and Easy of Use.”

We also need to redesign the office to make it more appealing and have private areas. No photos to show the flaws, no sketches of new floor plans, no budget for changes, no request to hire an architect, nothing- just we don’t like our offices.

But here is the kicker- now we announce how great we are for hiring over 220 new teachers. Considering the teaching staff runs between 800 and 900, this means that there has been nearly a quarter of the staff turned over in one year. In most organizations this would send red flags. Here, the board is happy- and ready to fire more people, while promising to hire new people.

Gee, I really want to work for this organization said the new teacher. Never.

The final slide was about reading specialists and bus drivers. Sort of like talking about Lawyers and Janitors at the same time- only distantly related as in they both clean up shit.

The pie in the sky information on reading specialists brought some edu/speak jargon from the superintendent, and Dr. Rountree, who is convinced that all teachers in Ohio are reading specialists- at least they were when she came up- back in the days of chalk boards and capital punishment. I still don’t know what a “RIP Band” is- and I’m sure none of the board does either- I googled it- nothing.

As to transportation- we’re still short drivers. We fired all the supervisors. If we can’t get the kids to school or home, does any of this matter? Was there a chart of how many we need, how many we have, what we do when people don’t show up- hell no.

But, this is the norm for presentations from Dayton Public Schools staff. No substance, no actionable information, no key, no goals, random format, poorly labeled. With no clearly defined next steps.

The next step for citizens is to meet on Thursday Dec 1, from 6-7:30 p.m. at Corinthian Baptist Church 700 S James H. McGee Blvd, Dayton to discuss next steps.

For the board, they should have posted their agenda for the Dec 6th meeting by noon Dec 1- where the fate of the paraprofessionals still hangs in the balance. This was punted from the Nov 17th meeting- so, there is no excuse for not knowing what’s coming.

One of the things that yesterdays meeting did, was end the possibility of reversing the actions taken at the Nov 8th meeting where 20 “administrators” were fired or terminated. That number isn’t really right, since some reverted back to their teaching positions- which may have effectively fired someone else- and at least one, Linda Stagles, the grant writer who didn’t bring in any grants, is being allowed to retire quietly- a courtesy not extended to Challenger Learning Center director MariJane Recob. After the second meeting, board policy requires a crazy 6 votes to rehire instead of just 4 or 5.

If this district wants to establish trust, and build confidence in the community, a new respect for the people and their time and money needs to be put in place. Meetings should cover real issues and involve substantive discussion, and create actionable plans. Meetings shouldn’t be held, just so the board can go back into executive session to argue over things that subvert the power and authority of the Superintendent. If you have to discuss her recommendations that much, you must not have that much faith in her.

It’s time for a new level of transparency and honesty in our district. It has to start with the timely posting of the next meetings agenda- including groundrules for citizen participation.

If you enjoyed this post, make sure you subscribe to my RSS feed [4]! If you wish to support this blog and independent journalism in Dayton, consider donating [5]. All of the effort that goes into writing posts and creating videos comes directly out of my pocket, so any amount helps!
Subscribe
9 Comments
Inline Feedbacks
View all comments

I have learned that a committee is a group of people, who, as individuals can’t make a decision and as a group, discuss reasons why they shouldn’t.

The chair of any committee should steer the group into making a decision so the subject is closed and the group can move to the next item. Very rare to see that in local government. Sometimes a wrong decision is better than no decision at all. Unfortunately some people worry about their image and not getting results.

When I found out that Ms. Rountree has been on the Board for 9 years, I was appalled! She acted & spoke like someone who has just come on and has no idea how anything works! She expressed that she has no idea what Paraprofessionals do or how many students they service. MAYBE, if she’d been at the last meeting, she would have a better idea.

The new Superintendent has been in place since June  and still hasn’5 visited all the schools in the District!? There are not that many — shows PD have been done in the first three weeks. She FINALLY visited Charity Adams Early Academy yesterday… for a total of 10 minutes.

The ENTIRE Board should step down. I also recommend less PhDs in their replacements. In my experience, too many PhDs are about discussion… not action or leadership.

SMDH.  What else is there to say?

At this point it’s very unlikely that experienced education professionals, teachers or admin, will be interested in working for DPS.

Is there any way Dayton can ask the State of Ohio to take over DPS? Sorta like Commissioner Gordon firing up the Batman searchlight so that Bruce Wayne can suit up and go into Batman mode? It’s time.

Joe Lacey was not present at the meeting. Was his hoodie still in the wash? Maybe we can all chip in and buy him a second hoodie, so he’ll always have one ready for important meetings.

To quote our Charles Kettering ” If you want to kill any idea in the world today, get a committee working on it.”

The Dayton Board of Education should be dropped into the basket of incompetents.