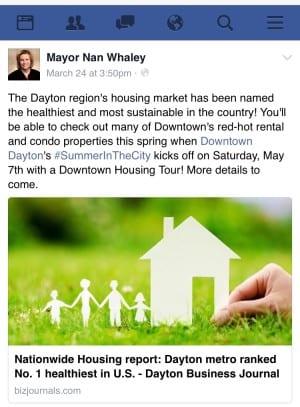 “There are three kinds of lies: lies, damned lies and statistics” is a quote that’s now listed as unattributable, then there is the reality distortion field around Dayton Mayor Nan Whaley who has the misguided audacity to bandy bullshit as fact: “The Dayton region’s housing market has been named the healthiest and most sustainable in the country!” [2]

First off, the study is reported in the Business Journal- that pinnacle of page click bait, and conducted by Nationwide insurance, which came to this far-fetched conclusion:

“The insurance company studied 400 metropolitan areas in the U.S. and ranked the regions based on indicators such as employment, demographics, the mortgage market and house prices.”

Anywhere you can buy a house routinely for less than you pay for a new car- it will sort of skew the figures- and note, it’s the Dayton region- not Dayton, of which she’s the mayor. The “Dayton region” is made up of 30+ fiefdoms that make no sense (recently working on a client’s business in Washington Township- I had to pick Centerville for Facebook- which doesn’t recognize a place called Washington Township) and add unnecessary overhead to everything in our region- including Mayor Whaley who is paid more than the average family of four makes in our city a year- for her part-time job requiring only a few hours per week by charter.

But, don’t worry- Dayton also comes up tops in other lists, by “Site Selection Magazine” and numbers of heroin induced deaths (I think we just slipped to second) and most definitely number one for the worst public school district in the state with more school districts than anyone would ever recommend if they were drawing this whole gov-r-n-ment thing up from scratch.

The one thing Dayton is number one for is disrespect. Daytonians loathe their city, their government, their leadership and with good reason. Take a drive around, especially in Santa Clara or Jane Reese or Westwood – and look at the “healthiest housing market” examples. When 1 out of 6 homes is vacant – or worse, boarded up- or falling down- talking about being number one is downright disrespectful to our intelligence.

If you want to paint a rosy picture of Dayton there are plenty of amazing things to talk about- but the difference is that they are based on actual facts (the best lies are ones that are based on possible facts- just a bit of marketing genius that I’ll share). However, Nan and the city of Dayton can claim very little actual responsibility for them. We have awesome bike paths, great metroparks, a world-class tourist attraction in the Air Force Museum, Sinclair has really affordable college tuition, super affordable housing, a few great historic neighborhoods, a great school of the Arts, a good indy music scene and immigrants have settled here successfully.

Saying we’ve got the number one healthiest and sustainable housing market in Dayton is what a feckless sycophant would say. Congratulations Mayor Whaley, once again- you’ve blown it.

If you enjoyed this post, make sure you subscribe to my RSS feed [3]! If you wish to support this blog and independent journalism in Dayton, consider donating [4]. All of the effort that goes into writing posts and creating videos comes directly out of my pocket, so any amount helps!
Subscribe
7 Comments
Inline Feedbacks
View all comments

A. What did you expect?
B. Time on market / tine until sold is atrocious in Dayton.
C. Isn’t the purpose of a politician to weave a sow’s ear into a silk purse?
D. These housing stats are akin to unemployment stats. Everyone reports on the U3 number, which IMHO is cooked, while very few will look at the U6 number is twice the U3.
E. Liars figure and figures lie.

“Saying we’ve got the number one healthiest and sustainable housing market in Dayton is what a feckless sycophant would say. Congratulations Mayor Whaley, once again- you’ve blown it.”

Um…Dave…normally agree but she did quote the article as “Dayton Region”, not Dayton.

Well what can we expect from a C-average graduate of U of D? The Whale has never been know for her intellectual fitness. Her one talent, politics, arises from her incessant power grabs and keeping skilled people shut out. Fortunately, people are becoming more aware of her true nature, thanks to this blog and her own outrageous acts of idiocy.

Here in the Midwest, one of our most beloved bits of folklore is the Barn Raising. Neighbors, friends and family all gather to build a barn, using massed manpower to raise a structure in a day or two, then doing same at a different location as the need arises. Efficient, fast, and it builds strong relationships based on mutual assistance and trust.

I propose a 21st century version of the venerable Barn Raising for the residents of Dayton…..the neighborhood Drug House Burning! The entire neighborhood turns out on a warm Saturday night with matches, flare guns, kerosene, and a couple of cases of beer. Maybe the event is blessed with a few words from clergy, then…whoosh, up she goes!

Great Dave C. We can also put up a shrine like they do at burning man in the blackrock makeshift city in the desert once a year for 7 days in Nevada.

We can erect one and at the end we burn it all up with celebration.

I say we brand it!

It’s Flamesteading……somebody register this right now with the copyright and trademark folks in DC.

Hey, it’s at least as good as DAYTON PATENTED – ORIGINALS WANTED, and quite a bit better than the U.D. venereal disease logo.

Amen Esrati. Nanny Whale is a spectacular liar and peddler of bile. The boarded up, burnt up, falling down, housing stock within the city limits of which this bloated bag of wind presides is not indicative to the region (thank god) that this study is indicating. Dayton itself trails in every other indicator but is thrown in due to regional strength. This is like the the class idiot being graded on the curve claiming academic victory. The highest taxes among all Ohio cities, worst schools, among the highest in crime, drug use, lowest in education and income are the constituents and statistics that make up Whaley world. That is your legacy Nan.