The Cox sisters don’t want to be in the news business and are doing the best they can to kill off any chance of survival by producing a crappy product of day old news, printed in Indianapolis and delivered late daily in Dayton.

They are in the cable business- and think that their Cox cash cow is the cats meow. Only problem is it won’t be long before cable is passe, fiber is only okay and 6G is all anyone needs, and they aren’t in that business.

The idea of buying cable packages, bundles and the like will seem as crazy as using a typewriter or a cassette tape.

There is value in journalism- unfortunately, they have zero interest in journalism as a product. They believed that the stories were the things you used to fill in around the advertising- and in Dayton, they had the power package of print, radio and TV- the leader, and all that- but, now, all that’s left is the obituaries, legal notices and the few people stupid enough to buy ads in a paper that’s barely distributed- never mind read anymore.

I get the iPad edition, but, almost once a week I’m getting a delayed delivery notice in my email- and that’s not even on snow days. I haven’t touched a piece of their newsprint in years. The sad thing is, they can’t even get their digital product right. The NYTimes wisely invested in Automattic- the makers of the open source WordPress platform long ago, and got a content management system that worked. They went behind a paywall long ago, in the days when the rest of the industry was still giving away their work. The NYTimes hasn’t quite figured out how to digital advertising yet either- but, because they understand journalism, they have enough paying subscribers that they can afford to still practice their craft.

The secret to getting paid to do journalism is to have real news, well written, in a timely manner, and to make sure it’s really news. Sometime ago, the Dayton Daily made a shift to “news-light” where they believed their consumers cared more about coupons and the latest car accident or house fire. Actual investigative journalism, the kind that matters to news junkies, became sort of a thing they’d try to do once a week instead of every day.

With each round of cuts in staff, they tended to chop at the top, getting rid of the old hands, the ones that cost more because they know more. You can mark the start of their failings about the time they told their 2x Pulitzer Prize winning photographer/editor to cut half his staff- and he told them to stick it where the sun doesn’t shine. I broke that story- and it went global. 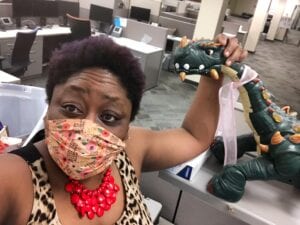 Amelia Robinson Packing her dinosaur and heading to Columbus

The latest loss- and I’m torn as to if it’s truly a loss, is the recently promoted Amelia Robinson who is abandoning the sinking ship for the Columbus Dispatch. After 21 years of reporting gossip and finding stories for the last ten years on Facebook, they’d promoted her to be the editorial page/”Community impact editor” and for the first time in a long time- those two pages were actually getting more interesting (although moving Thomas Suddes, the Statehouse beat guy to Monday from Sunday was a mistake). Actual opinions were making a comeback, letters to the editor showed up- and there was an attempt being made to actually engage with the readers about local issues- instead of just making pronouncements. Yes, it still had a lot of her friends facebook comments appearing  as content- but, compared to the pages under Ron Rollins- it was an order of magnitude better.

Here’s her DDN bio- before it disappears:

Amelia Robinson is a native of Cleveland where she learned all about sarcasm and aircraft repair as a student at the now closed Aviation High School. The graduate of Ohio University’s E.W. Scripps School of Journalism joined the Dayton Daily News staff in 2000 after a three-year stint at the Mansfield News Journal. Robinson is the recipient of the Society of Professional Journalists Greater Cincinnati Pro Chapter’s 2020 Camilla Warrick Award. The award honors journalists in any medium who use their professional role to make an impact on people in the community. Her Sunday column, “Smart Mouth,” has appeared in the newspaper’s Life & Arts section since 2005. It was recognized as the best newspaper column in Ohio in 2019 by the Society of Professional Journalists. In 2020, the column won best column in the National Society of Newspaper Columnists General Interest Print Publications Over 50,000 Circulation category. She has been recognized multiple times by the Ohio Associated Press Managing Editors for feature and column writing as well as digital and social media skills. Robinson hosts, edits and produces the “What Had Happened Was …” podcast, a 2019 National Association of Broadcasters Marconi award finalist. The podcast has earned more than 3 million downloads since launching in January of 2018. It won a 2020 All Ohio Excellence in Journalism Awards from the Press Club of Cleveland and the 2020 best podcast award from the SPJ Cincinnati Pro Chapter. The 2020 Kiplinger Program fellow is a founding member and former long-time president of the Greater Dayton Association of Black Journalists and now services as sergeant of arms. She also serves on the Dayton Sister City Committee and Leukemia and Lymphoma Society Dayton Man & Woman of the Year Committee. Robinson is president of the Oregon Historic District Society board of trustees.

Robinson is married to one of the few remaining journalists in the DDN newsroom- Anthony Shoemaker who grew up in this city. They will continue to live in their Oregon District home, while she commutes to Columbus as needed. Covid has helped make work from home journalism a reality- and apparently the Dispatch is ok having a “community impact” carpet bagger for an editor. Shoemaker is typically charged with covering and coordinating the political race coverage each year. I’d include his bio- but in true DDN fashion- it’s screwed up – and I’ll let him straighten out the page himself.

The reality is, good journalism comes from institutional knowledge. The ability to put current events into perspective via a lens that remembers the past and knows the players. With each departing writer, reporter, editor, the paper loses much more than a paycheck- they lose the knowledge to know who and what counts as news. More and more of the pages are being filled with press releases – masquerading as news, and with a city that’s already controlled by back room deals, we’re in an even greater need for good journalism.

Word is they are bringing Ray Marcano back as a temporary placeholder until they can find someone to take over. He knows the community, and enough of the remaining old hands to be able to know who to ask for help, but, in a newsroom that’s shafted and skewered so many of it’s own imports in the past (Leigh Allan and Eddie Roth both come to mind) it’s going to be hard to find someone to do the job justice- or to help the paper find it’s grove again.

If the Cox sisters and their red-headed step children had a half a clue, they’d start handing out Amazon Kindles with built in cellular to subscribers and skip the whole farce of print tomorrow. That’d be the first smart thing on the road back to a viable business model. Anymore insight, and they’d have to hire me to help them out. And both you and me know that ain’t going to happen.

And, note- this story is a fitting tribute to Ms. Robinson- I saw it on Facebook- and turned it into a story- just like she would have.

Her idea of “community impact” is churning out puff-pieces for Nan and her cronies. I’d almost rather read some good ol’ NYT both sides-isms. Good riddance.

Amelia can’t leave fast enough. Possibly the worst writer and most annoying human in this city.