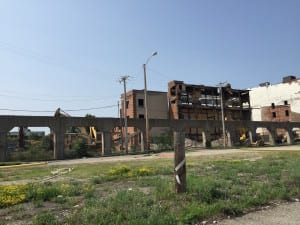 $165K of your tax dollars to do demolition to the old DP&L Steam plant at Webster and E. Third St

It’s not very far from 34 N. Main Street, along East Third Street, over to Webster Street. There, the city is spending $165,000 to demolish a building they bought for development that didn’t happen. [2]
Or, just a few blocks West and South to the hole in the ground, where the Dayton Daily news building was, along with the beautiful terra cotta tower, formerly known as the Schwind building.

Another investment, and another fail. The city spent over $1.25 million demolishing the Schwind- when they wouldn’t help a proven local developer renovate it for $1.8 million- as a loan plus tax credits. The “developer” they chose- has forgotten about this project.

The city spent $450K on the building on Wayne Avenue next to Garden Station [3], where an out of town developer was going to do something amazing. So, far, all that happened was that it freaked out the people who had invested so much of their time and energy turning what was city owned hobo land, into something amazing. No one has explained why the city long ago bought that piece of vacant property from the railroad for something like $110K.

We’re still in the midst of a deal debacle, where the city spent $500K to buy a piece of land that had the Cliburn Manor housing on it- for speculation, only to find out they sold it to a neighbor- “accidentally” for $650.

Nope, their investment record sucks. And this isn’t new. The Arcade. The Arcade Tower. The West Dayton YMCA. A downtown property owner told me there were only two buildings that hadn’t gone into bankruptcy- only 2 of all the office towers.

So, when we see the city spending $500K to buy the old Third National/Society/Key Bank building out of receivership- the one, where the previous owner stupidly shut the utilities off, without winterizing the building- causing pipes to freeze- burst and soak the place from the top down, creating a major mold issue according to sources, you have to wonder what’s in it for the taxpayers?

And why are we, the taxpayers, outbidding others- who will use private money, and pay taxes on the property? And, overbidding $150K from the appraised value as insult to injury?

Jonathan Hung, court-appointed receiver for the property, has asked the Montgomery County Common Pleas Court to approve the sale of the Paru Tower, 34 North Main Street, to the city for $500,000.

“The building is in surprisingly good condition, given its age and given how long it has sat on the market,” Hung said.

The 14-story tower was built in 1926 to house the Third National Bank and Trust Company. It later became the Society Bank building. The Montgomery County treasurer valued the building at $6.3 million in 2000, but in later years its value dropped dramatically.

In 2010 a self-proclaimed Hindu guru, Annamalai Annamalai, who called himself Dr. Commander Selvam, bought the building. Its value then was listed by the county at $1 million. Selvam’s renovation plans never materialized. Last year Selvam was convicted of securities fraud in Georgia and is serving a sentence of 27 years in federal prison.

According to the county treasurer, the current owner owes $257,193 in back taxes on the property. The most recent appraisal, paid for by the receiver, put the market value of the building at $350,000. That same appraisal listed the building’s best use as “speculation or development as a Historic Tax Credit market rate apartment community.”

Two other bidders made attempts to buy the building across from Courthouse Square, but the city’s bid was the highest.

“I earnestly believe this is the best offer that we have, not what we expected. I think all parties believed the property was worth more,” Hung said.

Hung is right. This is the best offer. It’s easy to spend other people’s money to make speculative investments. Of course, when you spend half a million to get elected to a mayor’s job that pays $45K a year, this kind of stupid disregard for the public’s money shouldn’t be a surprise. Way to go Mayor Whaley.

It’s time to ask the question that’s been bugging me for a long time: is there a building the city has successfully developed and sold at market rates? Or sustained as a profitable investment?

It’s time we pass a charter amendment stopping the city from purchasing any real estate that isn’t expressly for the public use. End of story.

If you enjoyed this post, make sure you subscribe to my RSS feed [5]! If you wish to support this blog and independent journalism in Dayton, consider donating [6]. All of the effort that goes into writing posts and creating videos comes directly out of my pocket, so any amount helps!
Subscribe
6 Comments
Inline Feedbacks
View all comments

While we’re on the subject of buildings–I note that DDN this week published an article about Arc de Square (yes THAT one still) with an estimate of $50 million to renovate it.

In 1995, according to Wikipedia, the estimate was $90 million. That was before big increases in construction material costs, before black mold and structure failure turned the building into something unsafe. And that was just for renovating it to its former self–not turning it into housing or mixed-use or offices, functions for which a huge, energy inefficient rotunda are unsuited. My guess is that simple renovation to its original (now unwanted) function would run to $200 million, extrapolating from the $90 million figure.

Is anyone suspecting with me that the consulting firm that was hired to draw up those estimates was, how shall we put it, dedicated to providing desired results to those who paid for the services?

I second your motion, David! NO more investments in property that isn’t earmarked for public use! It’s about time the residents of this mismanaged city get SOMEthing in return for their fleecing and mistreatment!

I tend to think the reason they buy the real estate because they know that if they buy it they can expunge the back taxes. Corporations don’t want to pay the back taxes, they want a quick turn around. A structure that takes too long to renovate isn’t exactly most developer’s idea of “Good business.” Inexpensive and fast seems to be the favorite of the hour.

$50M to renovate the Arcade in 2008 (that was the number I heard last year). Figure in some inflation for that, but I think it will be below $100M. I think they should do it. Said it before and I’ll say it again…no amount of spin will cover up the failure of this community to save & re-use perhaps (after the Old Courthouse) the best architectural treasure downtown. Y’all might as well give up on center city Dayton when they tear that one down.

I think Aaron is on to something, about clearing that tax debt, but maybe there are other ways of doing that? Didn’t know they didn’t pickle the building, though. So it suffered the same fate as the Admiral Benbow…the HVAC and plumbing are shot since everything froze, huh? What a mess.

Top down command and control central planning.
Sounds a lot like how the Soviet Union used to operate. Clearly, government officials and bureaucrats know what is best and private citizens can’t be trusted to make decisions.