The first thing to go in the lockdown is access to public records requests and public meetings rules. Requests put in pre-coronavirus are just being filled. Public meetings aren’t all that public- at least when it comes to citizens asking questions. And, in Facebook land, a group has started called “Support Sgt. James Myers” [1] but, in reality, it’s become much more than the firing of one officer, it’s turned into a case study of why professional journalism is so critical to a functioning democracy.

Davis, came to Centerville after a stint working his way up in the city of Montgomery, where he started in 2000 as finance director, moving up to assistant city manager in 2006 to acting city manager in 2011 and city manager in 2012. Montgomery is a sleepy bedroom community of 11,000 north of Cincinnati. He left his job here in Public Health as a budget analyst, which he’d held for 7 years. Somewhere in that time, he married Judge Mary Kate Huffman, the sister of the newly discovered racist Senator Steve Huffman [2] (“Could it just be that African Americans or the colored population do not wash their hands as well as other groups? Or wear a mask? Or do not socially distance themselves? Could that be the explanation for why the higher incidence?”).

Does anyone wonder how all these people get their jobs? Their brother Sam Huffman [3] is also a judge (Miami County Municipal Court). It’s as if we lived in a monarchy [4], but, of course, that isn’t even remotely possible….. lol. 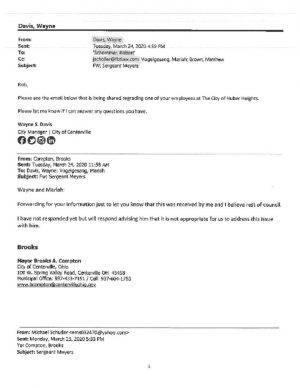 The group has discovered the power of the Public Records Request. This is where things get really embarrassing for Davis who sent an email over to the other crooked suburb’s city manager asking him to put the screws to a Centerville resident who works for Huber Heights. Guess what Mr. Davis, you really can’t do that.  Another citizen turned up a no-bid contract issued to the Greentree Group [6] AKA Back to Business IT [7], for IT support. No one seems to care anymore about no-bid contracts to political supporters [8], but in case you didn’t know who the Greentree Group is- they were one of Congressman Mike Turner’s biggest supporters (I made a video of myself panhandling outside their office [9]s in one of my runs for Congress) up until 2012, when you could see their donations [10]. Now, they may be spending money through other channels so it’s not so obvious (Ohio makes it nearly impossible to track campaign finance reports without a good tip of where to look). 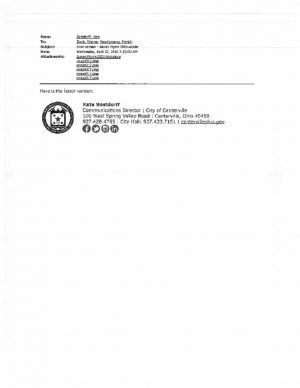 But the best piece of citizen journalism was finding an email from the Centerville PR person Kate Bostdorff [12](formerly Kate Bartlett of WHIO TV) to Wayne Baker who is formerly an employee of the Dayton Daily News, which he did a copy and paste job as “journalism” in the paper in his second story about the Myers dismissal. [13] Dayton Daily News editor Jim Bebbington won’t discuss Baker’s employment status, claiming it’s a personnel issue. Baker started at the paper in July 2015 according to his Linkedin [14]. Baker won’t talk either.

The next article out of the paper, by Nick Blizzard was just as much of a hot mess. The article about the appeals board decision on Myers [16], somehow gets sidetracked to talk about another employee who was terminated for bigotry and inappropriate touching so that  the casual reader could misinterpret it to be about Myers. The paper ran a clarification the next day on page 2, without apologizing to Myers or even admitting that they’d never talked to him about any of this.

It’s almost funny these days, one of the companies who helped destroy local news-Google is now buying very expensive full page ads saying “Support Local News” [17] in the Dayton Daily News each Sunday. They want you to subscribe to a paper that can’t fact check or give credit to other local journalists if their lives depended on it. Dayton Daily news Editor Jim Bebbington was nice enough to talk to me as I prepped this story- but, still refuses to allow his reporters to credit stories I break in his publication.

If you enjoyed this post, make sure you subscribe to my RSS feed [18]! If you wish to support this blog and independent journalism in Dayton, consider donating [19]. All of the effort that goes into writing posts and creating videos comes directly out of my pocket, so any amount helps!
Subscribe
5 Comments
Inline Feedbacks
View all comments