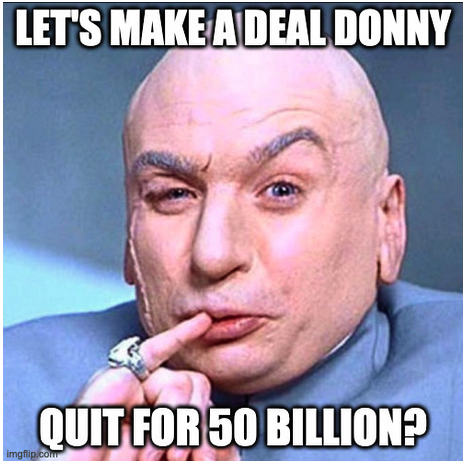 He’s more worried about the imploding of the American economy than millions dying.

He reached out to North Korea to offer pandemic help [1], after blaming their biggest supporters for causing this pandemic. He’s so far out of touch with the science and math of this, that in the aftermath, he may end up being tried for “Crimes against humanity [2]“- the charges that were brought against Nazi War Criminals in the Nuremberg trials.

It’s already apparent that Congress doesn’t have the balls to stand up to him. Generals have departed quietly instead of overruling his distorted views of law and order and the Uniform Code of Military Justice.

The only hope may be that the world’s billionaires come together to offer a deal. Trump loves to believe he’s the worlds greatest deal maker in the universe. The deal is simple, Trump can be the “World’s richest man” as long as he abdicates office, and goes to live with one of his buddies, Vladimir Putin or Kim Jong Un.

I don’t have the answer to who should take his place. If we really were going to buy out the President, may as well continue and buy out every member of Congress who has served more than 1 term and start from scratch. It’s pretty obvious, that the person we should have been listening to was the World’s previously richest man, Bill Gates. You know the one who gave a TED talk in 2015 warning us to prepare.

Because if Trump is allowed to continue, the world as we know it may be as empty as the space between the orange ones ears.

If you enjoyed this post, make sure you subscribe to my RSS feed [3]! If you wish to support this blog and independent journalism in Dayton, consider donating [4]. All of the effort that goes into writing posts and creating videos comes directly out of my pocket, so any amount helps!