They’ve spent money on coaching for the board and superintendent on how to run a meeting.

Unfortunately, they all must have failed the class. Last night, I filmed another 3 hour “strategic planning discussion” meeting, with most of it being pointless speeches by pompous board members (and Ron Lee and Dr. Hazel Rountree weren’t even there).

First question. Which board member suggested a newcomers/international academy? Rhonda Corr is very proud of her work in one with Cleveland Public Schools, which was a loving, caring, comforting, happy place. Of course, isn’t that what all of DPS should be shot back Sheila Taylor? We’ve now spent hours discussing some vague plan to put all the international students at Meadowdale, since the campus goes from K-12.  However, we’ve not figured out what to do with kids who are already spread out all over the district. Nor, do we know what to do with programs like Ruskin which are immersive bilingual and doing well all on their own. No one in the room has any institutional knowledge going back to the old ESL program at Miami Chapel, or the dumping of all the foreign kids at Patterson Kennedy before they tore it down.

Not a single ESL teacher was asked to speak, and Dr. Roberson really didn’t have a plan to present. Corr keeps asking for guidance from the board- and gets none. Some numbers of enrollment in DPS were provided (about 150 new kids a year, and it’s been trending up). I just love it when board members sit at their seat and try to research things on the fly- Joe Lacey pulling up census data. Doh!

No resolution, no plan, no next steps. Just waste time and move on to next disaster.

Longfellow. Dr. Sheila Burton talked to an unspecified architect and construction person, and started bandying big numbers around on what it would take to fix Longfellow- which like all DPS property- is suffering from deferred maintenance. $6 million bucks, give or take. Remember, the school only has about 60 students. There is talk about consolidating them at Gardendale or Gorman, or who knows where, but they need work too. There is no one tasked to manage this project, there are no deadlines, there are no assessments, but people seem to think getting the building historic landmark status is a good idea- because, well, all of them are skilled developers with preservation experience. Doh!

No plan, no resolution, no next steps. Just waste time and move on to the next disaster.

A new bus schedule is in the works. Was anyone from transportation there to explain it? Hell no. We’re switching back to a 3 tier schedule, which means we’ll have three different route slots. This way drivers will run three schedules instead of two. They’ll also travel less. New restrictions that there will be no routes longer than 30 minutes in length, and then the kicker- we’re going back to four zones, with kids only being able to go to school in their zone. No discussion of what this means for specialty schools like the Boys Academy or Charity Early school for girls. No discussion of grandfathering in students so they won’t have to change schools. Bam, there it is. We’d like to promote the pay the parents option- we’ll pay you $250 a year to get your kid to school- something not many parents know about.

This wasn’t so much a waste of time- just unanswered questions.

Another discussion of “Sensory rooms” was given by Dr. Roberson who has found federal dollars to build these new solutions to misbehaving children. They are going to add 5 a year each year to elementary buildings for the next three years. By 2020 we should have one in every building. There was no description of what these rooms entail, what training goes with them, or what they bring to the table other than being a better option than handcuffing students. Yet, Corr still had to stick her foot in her mouth and undo all the good will by suggesting that from now on, we just call Dayton Police instead to deal with kids who are out of control- aye carumba- wasn’t that why we hired “School Resource Officers” in the first place? So we wouldn’t have cops in schools?

I still don’t know what these are, if they work, when they work and what’s involved. However, they are apparently the new alternative to handcuffs. ’nuff said. 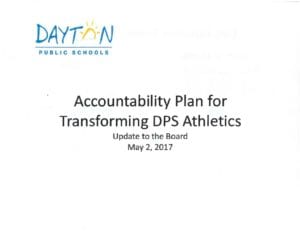 Then the crown jewel. Even though District Athletic Director Mark Baker couldn’t calculate eligibility, we’re to believe that he and Dr. Markay Winston have been holed up together coming up with the new “Accountability Plan for Transforming DPS Athletics”- Winston was there- Baker, no where to be seen. After we learned all about the new org chart with straight lines and dashed lines (and looking a bit like spilled spaghetti) several board members gushed over it. Sheila Taylor thinks this is just great. Joe Lacey on the other hand, seemed to not care at all- as if he’d written off athletics altogether. He thinks athletics shouldn’t get any more attention than other part of DPS.

The plan really looked more like a Winston/Spurlock (Judy Spurlock HR Director) creation than a Baker one. New was the magic word since apparently we’d been running the organization without job descriptions,  operations manual, protocols for OHSAA infractions/violations, employee monitoring or even financial controls. We’re going to create a new “Student Athlete Eligibility Warning System,” have mandatory study tables, a student athlete summer leadership symposium and a new 90-90-90 “non-negotiable rule for sports participation- which Dr. Winston couldn’t remember what it was. The new hiring process was highlighted- as were the board imposed conditions that aren’t visible until you start to apply [2].

There was also a presentation by Dr. Elizabeth Lolli about summer school. It seems we keep moving the enrollment deadline later and later, and still don’t have the participation we’d hoped to have, despite dropping the fee to either $25 or free (I’m sorry- I can’t remember). They’ve sent out flyers and still don’t have near the number of students enrolled that they want. John McManus suggested consulting with their ad agency, The Ohlmann Group, but was shot down.

They’ve hired a private company to run the courses, but, the private company has to hire DPS teachers first. Since enrollment isn’t finalized, it’s making it hard to staff appropriately. There is also a big bill for transportation. Seemed to sound like it was going to cost at least $1000 per student without transportation costs factored in. Of course, since none of these documents or presentations were uploaded for the public on Board Docs- or even the details of any of these plans, and this was at a meeting where the public isn’t allowed to speak, one has to wonder WTF is really going on?

Three hours after the start of the circus, those brave souls who were in the peanut gallery were treated to an adjournment without them going into executive session for once.

Now we can look forward to the next meeting, on 5/9/17 where we have a “review meeting” where constituents can’t speak, before we get to the “business meeting” on 5/16/17 where I imagine we’ll have a huge turnout again to speak their minds about these latest brainstorms of Rhonda Corr and crew.

If you enjoyed this post, make sure you subscribe to my RSS feed [3]! If you wish to support this blog and independent journalism in Dayton, consider donating [4]. All of the effort that goes into writing posts and creating videos comes directly out of my pocket, so any amount helps!
Subscribe
2 Comments
Inline Feedbacks
View all comments

David E – Good job using this blog to focus public attention on the ongoing CF known as Dayton Public Schools. You are doing a great job of publicizing the board’s graft, incompetence, cronyism, bullying, and lack of
transparency. Characters like “bag-man” Baguirov, Rhonda “the wrecker” Corr and Joe “hoodie” Lacey need to be held accountable.

The biggest impediment to forward progress for DPS/CF is the board’s complete lack if shame and embarrassment regarding the continuing disaster that they oversee and direct.

DPS/CF will not improve while the current board is in place.

Sensory rooms are invaluable for children on the spectrum who often need to decompress and refocus in ways “mainstream” students don’t. Rosa Parks has (had?) one, and it was amazing.