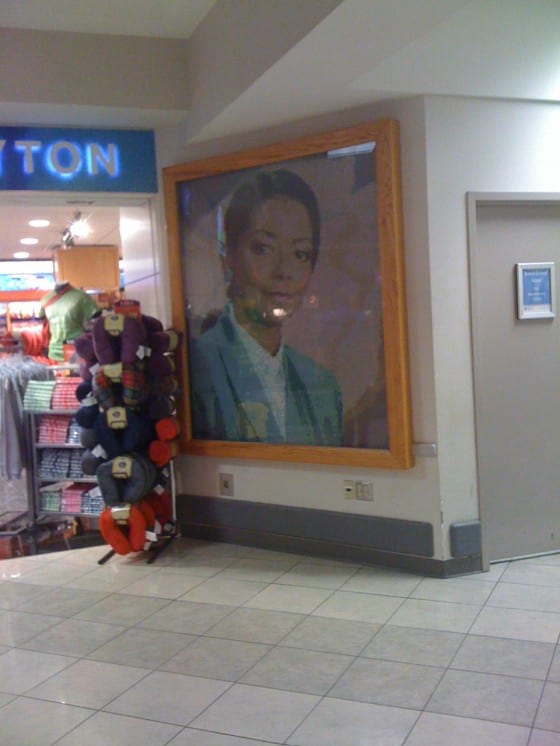 Others were also appalled that this image is representing Dayton- instead of a photograph of our skyline (reader and photo ace Jim Crotty [2] volunteered one of his photos).

Many were thankful that she wasn’t wearing her “goofy glasses” or a hat- but, beside that- I find any public display of politicians’ names and likenesses an affront to the taxpayers and have said so previously. In my post “Ban political signs at taxpayer expense” [3] back in 2007, I suggested that all use of candidates’ names- from the stickers on the gas pumps, to the letterhead for the County Treasurer to the “Welcome to Ohio, John Doe, Governor” should be paid for out of the candidates’ campaign funds.

I don’t like it when Karl Keith makes his face the favicon for the County Website, [4] either. He should be charged per page view, just like any other online advertising.

But most importantly, although I was mocked by the Dayton Daily News editorial board for suggesting it [5], the airport is a regional asset, not a Dayton one, and should be governed and paid for by the entire region. Putting the former mayor’s image up instead of a “Welcome to Dayton,” “Get Midwest” or “H2Open for Business” sign- is a colossal lost opportunity.

If you enjoyed this post, make sure you subscribe to my RSS feed [6]! If you wish to support this blog and independent journalism in Dayton, consider donating [7]. All of the effort that goes into writing posts and creating videos comes directly out of my pocket, so any amount helps!
Subscribe
8 Comments
Inline Feedbacks
View all comments