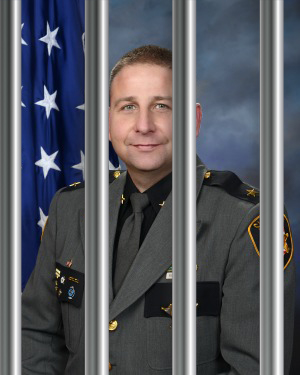 Maybe Streck’s new position if he continues to fail the Corrections officers of Montgomery County?

Dayton, we’ve got a problem. And I don’t mean the little Dayton, central city to a ring of banana republics that pretend to be cities or townships or whatever you want to call yourselves, I mean Dayton Ohio- the one on the map. Our jail, “run” by Sheriff Rob Streck is a shit-show on steroids.

Most readers of this blog are well aware that the County has paid north of $10M in settlements for incompetence under past Sheriff Phil “the torturer” Plummer and now under his incompetent understudy, Rob Streck. Streck wouldn’t be sheriff if not for the absolute incompetence of the Montgomery County Democratic Party that is incapable of finding candidates (probably because the Monarchy/Friends and Family plan party has no members in law enforcement for fear of all being arrested for corruption). After the two known pepper sprayings of inmates in restraints (see www.esrati.com/deadly [1]) a few deaths and multiple cases of abuse (I’ve got a prisoner getting his leg broken by Corrections officers within a half-hour of arrival on tape waiting to be turned into yet another story- sitting in my queue of to-do’s) the mistreatment of the inmates is a well known, but this article isn’t about the mistreatment of criminals – so all of you ignoramuses who sit back and say the best way to avoid being mistreated  in the Montgomery County jail is don’t do a crime, this story is for you.

The Corrections Officers are now being abused by the incompetent Sheriff to the point that there aren’t enough of them left to run a bad jail, never mind a good one. Another senior CO just quit this weekend, and it’s little wonder why. Most are working double shifts (a “hit” in CO parlance) 4 to 5 days a week, and while time and a half may have some of them making north of six figures (that’s $100,000 for those of you like Streck who don’t realize that “Corrections Officers” shouldn’t be making that much money), the reality is no jail is safe when the folks running it are running scared- even taking pay cuts to get out of the hell hole.

Plea’s from the Union Rep, Justin Haines, to sit down and negotiate a solution are being rebuffed, wait, no, ignored, by Julie [2]Droessler, the Personnel Director at Montgomery County Sheriff’s Office and the OPBA counsel Joe Hegedus [3] are being ignored, here is the letter that was leaked:

Hi Julie and Joe,
I was asked to talked  (sic) to you guys about the staffing in the jail.
We are down 28-30 C/O’s. We have C/O’s out on medical leave and military leave.
Leaving us roughly 37 down.
All or 1st watch and 3rd watch (whole shifts) are being hit 3 to 4 times a week. On Friday
June 11 five C/O’s where double hit on 3rd watch. 2nd watch has had all but I or 2 C/O’s
get bit for overtime. Even with people being double hit. shifts are not able to cover other
watches overtime positions.
ls it possible to schedule a labor management meeting to discuss staffing issues ? If not
can something be put out to all of the C/O’s about what is being done to get people
hired and keep the people we have. It is gelling bad and we are going to continued (sic) to loose
more people (senior ones now than the pay has increased to keep the newer ones).
Since that committee put out that report in February 2019. The jail has promoted more
Sgt.’s and hire (sic) more Deputies for jail transportation. C/O’s working in the jail is no where
close to what that report recommended. I don’t know if the sheriff can send out emails
asking everybody’s input on what to do, to get people hired and keep the ones we have.
Thank You,
Justin Haines

The Sheriff has actively been recruiting new Corrections Officers and Deputies on their new “Careers page” [4] However, they’ve been using a bait and switch techniques according to sources to just keep the jail afloat- telling new deputies that they will need to do a month in the jail before moving to road crews- to provide temporary help. Seasoned Corrections Officers all feel slighted by the $4 hr raise for starting C/O’s- while they got 83 cents. For a while, Sgt’s were being assigned as C/O’s until Haines put a stop to it, yet the fact is the jail has been understaffed for the last 10 years is the dirty little secret no one wants to talk about.

At this point, the Montgomery County Jail may be the most dangerous place to work, never mind serve time, because exhausted C/O’s make mistakes.

Saying this is a County issue is dodging the problem. Every single one of the 30+ banana republics like Kettering, Centerville, Moraine and Union- send their citizens into this hell hole- yet pass the buck to the county commissioners. It’s time to stop ignoring the fact that your citizens deserve better, even if they did break the law. It’s time to start requiring all the Mayberry RFD police departments in the County to start detailing police officers to the jail to serve as C/O’s until this staffing nightmare can be resolved. Either that, or start finding jails outside of Montgomery County to send your hoodlums to. The reality is, any jurisdiction be it city or township, that sends their citizens into this shitshow is failing their citizens.

If Streck can’t fix this, he should be removed from office for gross incompetence, and whomever his Republican party boss  (his old boss Plummer) picks to replace him should have 30 days to propose a solution, or it’s time to ask the State to take over the jail until competent leaders can be found.

Just remember- a lot of the people in the jail are innocent until proven guilty. The only question now is why isn’t Streck an inmate? Because he’s committing a crime daily in his mismanagement of the jail.

And if you wonder what the real solution is to our jail problem- be sure to subscribe to Reconstructing Dayton [5], the organization committed to identifying waste and eliminating expensive duplication of services in Montgomery County.

If you enjoyed this post, make sure you subscribe to my RSS feed [6]! If you wish to support this blog and independent journalism in Dayton, consider donating [7]. All of the effort that goes into writing posts and creating videos comes directly out of my pocket, so any amount helps!
Subscribe
0 Comments
Inline Feedbacks
View all comments